Juan Sebastián Roldán, private secretary of the Presidency, said that the announcement of the creation of a parallel army is a crime in Ecuador. 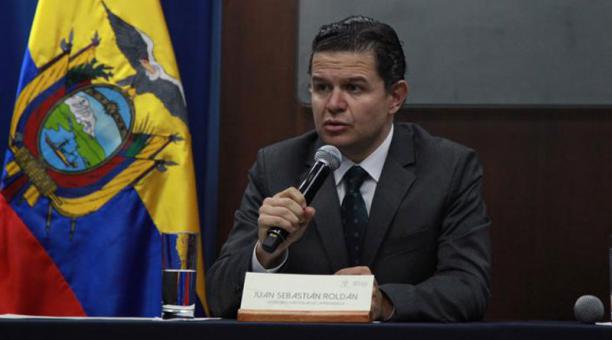 The official spoke in Carondelet on Tuesday, October 22, 2019 about the events recorded during the protests and referred to the statements of Jaime Vargas, president of the Confederation of Indigenous Nationalities of Ecuador (Conaie), who made in a speech before his bases where he proposed “create our own army.”

According to the Secretary, those who commit a crime, or raise such serious elements as the possibility of creating a parallel army must respond to Justice.

“It is up to the Prosecutor’s Office and the judges how to act in this regard, we as an Executive are very concerned. In this country there is an Army, that Army is framed in the laws and in the Constitution… of course any announcement of the creation of a parallel army has no grip on the Constitution and has no grip on a Rule of Law like the Ecuadorian ” , Roldán said.

The government official reacted that way after Vargas said last Saturday, October 19, to the bases of the indigenous movement in Macas, province of Morona Santiago: “We are going to organize with our ex-combatants, we have to make our own army, to defend to the people, our own security from our communities. ”

The Ministry of Government presented the statements of the leaders in the demonstrations of the indigenous movement to be investigated, after protests.

Rodán also spoke of the allegations that have been made by members of the Government. “As you know, not reporting a possible crime is a crime in itself. So, we have the obligation that if more than 300 military and police officers were kidnapped, we have to deliver that complaint to the Prosecutor’s Office and the judges, ”he said of the different events that were recorded during the demonstrations from October 3 to 13 by the Government’s decision to eliminate fuel subsidies, which they concluded after an agreement between President Lenín Moreno and Conaie.

The official said the allegations are part of the country’s legislation.

“We have the obligation as a State to enforce the laws, the Executive has to execute those laws that are currently in force in Ecuador, for that reason, it is not a matter of will or not, it is a matter of which we have the obligation to that the law be preserved, precisely so that there are no temptations to arm parallel states or parallel armies is that there is a Constitution and a law, and the Executive, in this case the Government, has the obligation to enforce that law. ”

During the press conference from the Presidential Palace, Roldán assured that the dialogue maintained by the Government is with 80 organizations and different groups such as indigenous people, Conaie, unions, social and business organizations.

The Secretary mentioned that these meetings are being carried out, in terms of mediation, by the United Nations, the Ecuadorian Episcopal Conference and the rectors of some universities in the country.

Ecuadorian Shrimp farmers meet in Guayaquil at the Aqua Expo 2019