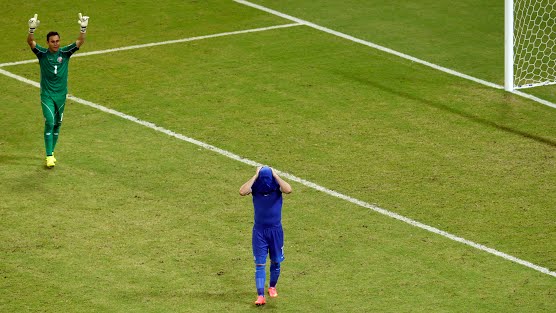 This Sunday at the Arena de Pernambuco stadium in Recife, the Costa Rica team defeated Greece on penalties (5-3), after a 1-1 draw in the 90 minutes of regulation time and a scoreless overtime, thus achieving the classification to the quarterfinals of the World Cup for the first time on its history.

The first goal was scored by “tico” Bryan Suarez at the minute 52 and it looked like the game would end without a tie. However, Greek Theofanis Gekas scored the second goal of the match at minute 91.

Although the referee expelled a player from Costa Rica, Oscar Duarte, at minute 66, Greece could not take advantage and failed to achieve victory in the regulation time or in overtime.

Penalties kept matched until the Costa Rican goalkeeper Keylor Navas, managed to deflect the shot from Theofanis Gekas. After that Michael Umana only had to score the following penalty to secure victory for his team.