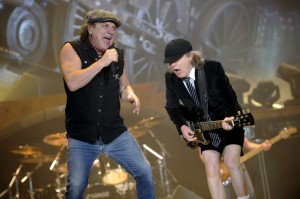 Brian Johnson, lead singer of the Australian band AC / DC said that by the end of this year they are planning a world tour. This news comes after the declarations of its members on the separation of Malcolm Young, guitarist and founder of the band, due to illness.

According to the Spanish website 20minutos.com the band is working on a new album since May last year in Vancouver (Canada). Johnson also stated that in order to fulfill professional commitments involved in this tour, he will leave his television program “Cars that Rock”.