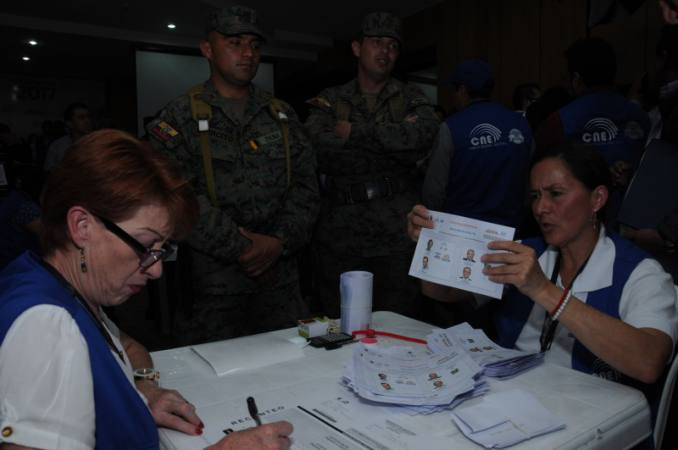 The CREO-SUMA alliance firmly maintains its decision to challenge today the runoff results announced by the National Electoral Council (CNE) and requests the opening of more than 41,000 ballot boxes.
Medardo Oleas, former president of the old Supreme Electoral Tribunal, said that there is no possibility of a total vote count since the legal provisions contained in the Democracy Code do not allow this.

“Nobody can order to open all the ballot boxes because there is not a legal basis for that proceeding,” the former official said.

He warned that the count of the 1,795 tally vote sheets would not be possible in this objection stage because these were already reviewed by the provincial boards. It should be recalled that the CREO-SUMA party initially denounced inconsistencies in thesesheets, and unless an extraordinary situation is given in which they prove with documents that this data is not real, the total vote recount would be approved.

He emphasized that the requests of CREO-SUMA are too general, and the CNE is shown itself as an institution of little trust for its regulations, because “all its members are linked to the Alianza PAIS government party.”
Omar Simon, the former holder of the CNE, explained that the Code of Democracy is clear in section 138 on cases of manual counting of votes. That step is taken when a sheet has been rejected by the scrutiny computer system due to a numerical inconsistency; When the signatures of the president or the secretary of the boards are missing in the vote tally sheets; And, when the physical sheets do not coincide with the computed records.

Some media are sent to the dock after a complaint