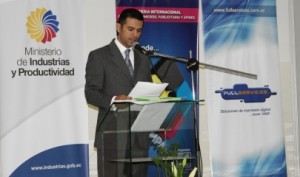 The Deputy Minister of Industry and Productivity, Byron Proaño, yesterday, August 28, denied that there is a shortage of pharmaceuticals due to the announcement of Price Fixing Regulation on Drug Use and Human Consumption. The official made this pronouncement during the inauguration of the International Pharmaceutical Industry Exhibition, which will be held until August 29 in Guayaquil.

The regulation was announced on July 19 by the Vice President of Ecuador Jorge Glas, in a weekly address.

Through this legislation, the Government will regulate the price of some 5,000 drugs of common use and to fight “catastrophic or rare” diseases, equivalent to 54% of the market.

Glas explained that to establish the official price, the mean of all the rates will be calculated, previously eliminating the higher. The resulting amount will be set as the limit to which the analized drug can marketed.