Dhruv case: FAE received the helicopters despite warnings of failure 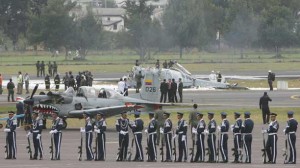 Despite “discrepancies in the short and medium term” encountered by the technical commission of five helicopters Dhruv reception, it was recommended that these devices become operational “as soon as possible,” according to a “aide memoire” signed by Alonso Espinosa, commander of Air Operations and Defense Command (COAD for its Spanish acronym) of the Ecuadorian Air Force (FAE for its Spanish acronym).

This document was taken into account by the General Comptroller of the State to elaborate an audit on the acquisition of the Dhruv in 2008.

Furthermore, during reviews of COAD in April 2009, “observations” of the FAE-601 VIP aircraft, which was adapted for use by the President of the Republic, like its “access compartments evolved during the flight” were found or that the FAE 602, 603, 604, 605, had no system approach to land EGPWS.

The COAD expected that until April 30 of that year, the Hindustan Aeronautics Limited (HAL), to which the Dhruv were acquired for $ 45’200.000, resolve the failures such as lack of oxygen masks for pilots, flight oil cabin roof PAX or absence of an oxygen system PAX necessary to conduct flights at high altitudes.

Ecuadorian vessel was detained for four days in Panama