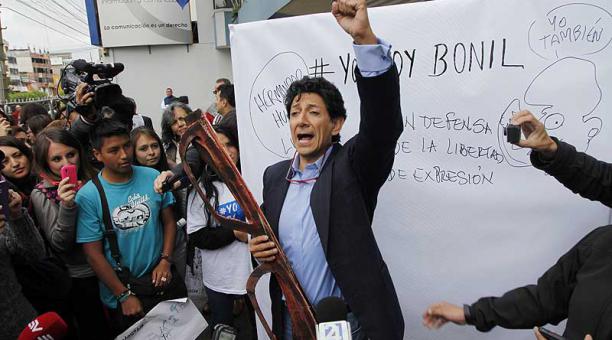 El Universo newspaper apologized on Monday with the Afro groups by order of the Superintendent of Communication (SuperCom), which considered “discriminatory” one cartoon done by Xavier Bonilla, mostly known as ‘Bonil.’

On Friday, February 13, the SuperCom imposed the penalty to the newspaper El Universo and presented a written admonition to Bonil by the “discriminatory content” of the publication released in August 2014.

“I extend a public apology to the complainant groups who felt affected by the caricature of the Bonil column,” says the text in the space for the drawings of the cartoonist.

However, El Universo said that to comply with the sanction it would not be “paving to the nullity” which they denounced during the administrative process, without criminal repercussions, the newspaper faced because of the complaint of Afro-Ecuadorians.

The public apology is signed by Carlos Perez, director of the newspaper, from Guayaquil city.

In its resolution on Friday, the SuperCom urged the cartoonist to “correct his practices” and “refrain from repeating” in breaching the Communications Law.