Dilma followers defend her waiting for an opposition march 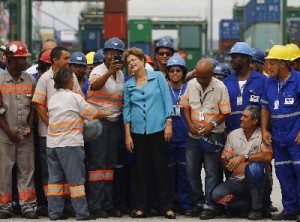 Thousands of unionists, students and landless peasants protested yesterday in 13 states of Brazil in defense of democracy and Petrobras, wrapped in a corruption scandal.

The marches were called by political movements related to the ruling Workers Party. The manifestations had more than 13,000 people and was made on the waiting of other marches against Rousseff planned for tomorrow in Brazil, where some groups will ask for the dismissal of the President.

This occurs after the Supreme Court authorized the investigation of 47 politicians, including 12 senators and 22 deputies on duty, for involvement in the plot of bribery and money laundering of Petrobras. Most belong to the ruling party.