Disagreement in Alianza PAIS by proposal for prefectures 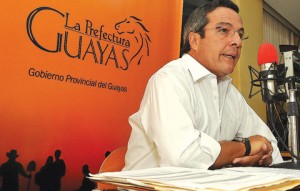 The proposed constitutional amendment to parish councils so that prefects are elected only with the votes of the rural population of a province and not with those of the urban population generated a new controversy in the Alianza PAIS (AP) bloc.

Yesterday, the prefect of Pichincha and director of AP in Pichincha, Gustavo Baroja, along with pro-government assembly members Fausto Cayambe, Alexandra Ocles and Mary Verduga rejected the proposal that ,however, was supported by their peers Maria Jose Carrion, Esteban Melo and Christian Viteri on Tuesday.

But the subject does not remain in the Assembly: on December 9 in Loja, the president and national president of AP, Rafael Correa, said: “It is assumed that the prefecture _ serves the rural sector, but in most provinces, great part of voters live in rural areas and they pretend to win with the urban vote, not with the rural vote and there´s a series of inconsistencies of which we can talk about.”