Doctors that dealed with Ebola epidemic in Africa return to Cuba 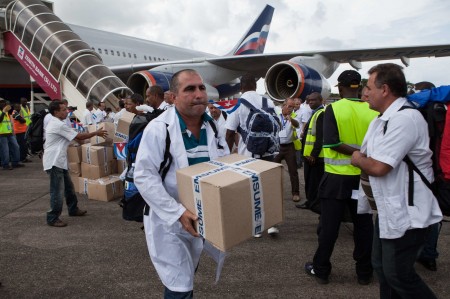 A group of 150 Cuban doctors returned to Cuba today, after leaving the epidemic of Ebola more controlled, local media reported.

“At 1:06 am (5:06 GMT) of Monday 150 health collaborators arrived to the country, 98 of them from Sierra Leone and 52 from Liberia, where they fought the dangerous Ebola virus,” said the official newspaper Granma.

It added that “the epidemic has not been defeated, but rates of infection and fatality have declined significantly.”

The doctors are members of the Cuban medical brigade “Henry Reeve,” specialized in disaster situations.