Draft of the new Labour Code would contemplate strike without pay 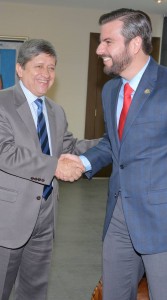 The President of the Chamber of Commerce of Guayaquil, Pablo Arosemena, said that the draft Labour Code includes the right to strike without pay.

“And we see that as a positive thing”, the authority said after a breakfast he held with several members of the guild and the Minister of Labour Relations, Carlos Marx Carrasco.

“Something interesting that the Minister said at the meeting, I think he did not commented it here but he said it there, that these strikes would not be paid”, said Arosemena.