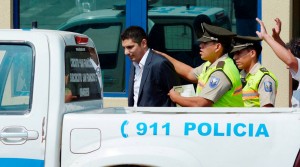 Approximately five minutes of freedom enjoyed the Former Assemblyman Fernando Balda until he was again arrested by a different process to which he remained in jail for a year and ten months. The defendant received the new citation ballot just caming out of the Deprivation of Liberty Center Zonal 8, located on the way to Duale, just after 14:30.

Balda, who until yesterday served a sentence for the crime of no serious injury slander, was released by the disappearance of that figure in the new Penal Code and currently detained by “alimony debt,” confirmed his Lawyer Nelson Freddy Pauta.

Pauta complained that the ballot would have been forged during the 48 hours that his client remained “unconstitutionally detained”.