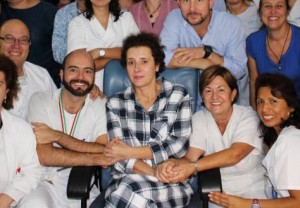 The Spanish nurse Teresa Romero, who is recovering fromthe Ebola infection was transferred to a regular room after withdrawing her from an isolation unit of the hospital Carlos III de Madrid.

Romero tested positive for Ebola on October 6, but was declared free of the virus two weeks later. She was the first person out of West Africa being infected by the latest outbreak.

She is now receiving attention from medical staff who no longer needs to wear protective suits, said the hospital.

The nurse was able to join her husband, Javier Limón, and other members of the hospital staff. Tests confirmed that Romero has no traces of the virus in her body fluids.