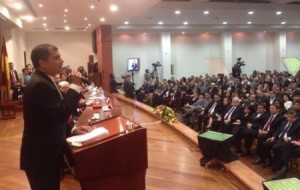 President Rafael Correa yesterday defended the decision of the Constitutional Court regarding the proposed amendments.

Correa noted that certain opposition and press “wanted to impose their view on how the amendments had to be made, be treated and decided by referendum.”

The Head of State highlighted as positive the work of the Court, which according to the President, “despite this impressive pressure the Court judged in law, without being subjected to the vagaries of the press and has determined the obvious and what any serious jurist knew: that the proposed amendments to the Constitution had to be addressed in the Assembly.”

Correa explained that only the proposal concerning the protective action was considered by the Court as a matter of a constituent assembly,” a decision that we do not agree, but we respect,” said the President.

He noted that the detractors just worry about the amendment of Article 144 of the Constitution, which would allow indefinite reelection. “To delegitimize the proposal they have made a full apology that democracy is based on the alternation,” he said .

“The amendment for the reelection does not make an authority, it allows him to be a candidate, but does not make anyone an authority. It is the votes of the Ecuadorian people who make someone a Mayor, a President, etc. Let citizens choose without restrictions, democracy without limits,” the President said.