Economic proposals of candidates for the presidency of Barcelona SC 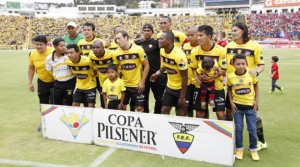 The three candidates for president of the sports club Barcelona propose possible solutions to the budget deficit of the same.

Luis Noboa, Carlos Nahon and Jose Francisco Cevallos have offered to clean up the deficit of the club within a period of four years, which will begin next January. Elections will be held in October and so far they are the only ones who have shown their desire to take the presidential chair of the club.

According to information officially announced by the current president, Antonio Noboa, the global debt of the bullfighter team would be roughly USD 12 million. That would include debts with employees and lawsuits of former players.

Luis Noboa is the current vice president of the club, brother of Antonio Noboa, president of the team since 2011. He still does not make official his proposal but advanced he has “an important economic project”. If this does not produce results, he will pay the debts with his personal savings.

The Guayaquil businessman Carlos Nahon, wants to bet on the modernization of the Monumental stadium and a massive campaign to attract members. He also has planned strategic alliances with new sponsors.

Jose Francisco Cevallos, former goalkeeper, bets on the self-sustainability of the team. He plans to pay $ 3 million per year, with a good management of resources generated by the team.

The officialization of candidates for the presidency of Barcelona SC starts