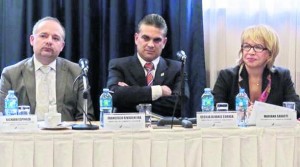 For more than eight hours the Ministers of Foreign Trade of Ecuador and Colombia, Francisco Rivadeneira and Cecilia Alvarez – Correa analyzed the application of exchange safeguards. The meeting lasted until 19:00 but the parties have not yet reached agreement on this subject.

Representatives of Ecuador and Colombia met yesterday at the Hotel Quito, nine days after the exchange safeguards against Colombia and Peru, 7% and 21%, respectively began to be applied.

Alvarez-Correa said that fixing safeguards would impact 2500 companies in her country and annually, would hit economically in amounts of between USD 200 million and 300 million. The most affected sectors would be the automotive, mechanical and agricultural, said the authority.

The Colombian newspaper La República, indicated that for the business sector it would be necessary that the government “identifies through which retaliation or what procedures the Colombian company can be defended, because that dialogue strategy in the tables of high level do not seem to be working. “

$ 20 bills shall hereafter be issued with data