Ecuador and Colombia Improves Attention Given to Refugees 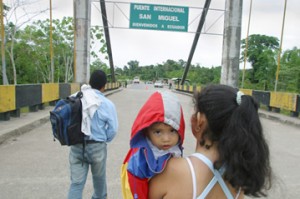 Both countries are scheduled to meet tomorrow to analyze and improve the services and attention given to the Colombian refugees that crossed the border in order to escape from the violence of their homeland.

Today a source in the Ecuadorian Foreign Ministry said that the meeting will start tomorrow.

Alfredo Morales, General Director for the Refugees of the Ecuadorian Foreign Ministry assured the main objective of the meeting is to find solutions for the financial, social and humanitarian troubles that the Colombian refugees seek in Ecuador.

According to a notice to the Presidency, Morales approved the decision of the Colombian government after acknowledging the responsibility on this subject. Not only economically but it also treats the border and migratory control, as well as the implementation of politics that help Colombian refugees to get jobs while on Ecuadorian soil.

Currently Ecuador is the country with the largest percentage of recognized refugees on Latin America with more than 54,000, from which 53,000 are Colombians. This 98% of the refugees’ number is indicated on the website of the Presidency.

Morales stated that the Ecuadorian government has spent almost 40 millions of dollars on the attention given to the Colombian refugees.

Members of the United Nations are expected to attend the meeting to discuss the future of the refugees. However Acnur disagrees with the number of Colombian refugees the President exposes since there are 55,000 recognized Colombians living in Ecuador. But the number of people with the need of international protection rises to 135.000