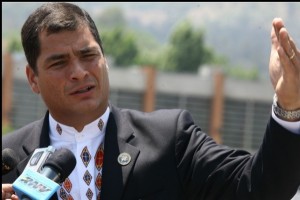 The Ecuadorian Government announced yesterday _ August 12 that is evaluating the export supply _ can present to Russia, following the decision of that country of vetoing the entry of food products in the European Union (EU), United States and other Western countries and expand their purchases in Latin America.

During a meeting with media, President Rafael Correa said that he has no record of complaints of European institutions on this issue, but if it occurs will receive a timely response.

“To my knowledge Latin America is not part, at least not yet, of the European Union,” Correa said.

He compared the position of Europe with which European countries have held on issues such as arms sales and considered desirable before voicing complaints about the position of other governments in their trade relations with Russia, examine their own business practices.