For the second time in history. Ecuador defeated Mexico as a visitor team with a final score of 2-1. The game took place at the Omnilife stadium, Guadalajara.

The Ecuadorian team is being coached by Reinaldo Rueda at the present time,which showeda good balance in its lineup. The players controlled the midfield as its strongest weapon. Luis Antonio Valencia, Cristian Noboa and David Quiroz are the names of the players who did a remarkable job in the field.

During the first 30 seconds of the game, the scoreboard began running when Valencia took the ball, passed it to Cristian Benítez, who avoided two defense players and hit the cross straight into the goal after overcoming “Memo” Ochoa.

Luis Checa tied the game at the minute 40 when he accidentally made an own goal.

The victory point was scored at minute 58, when Antonio Valencia and Jaime 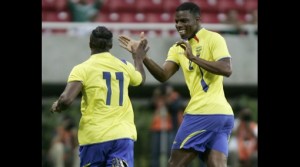 Ayovi planned an outstanding move. Valencia stole the ball at the midfield, then the Manchester player gave a pass to Jaime Ayovi, who scored the second goal with his right leg.

Quiroz Made it to the Finals