GUAYAQUIL, Ecuador. Three more victims were confirmed at the morgue in the Transit office, meaning that the exact death toll after Perimetral accident raised up to 15 and 7 injured people.

More than 20 people were run over at Perimetral’s fast route, near Bastión Popular’s 11th block. At first only 8 victims were counted. 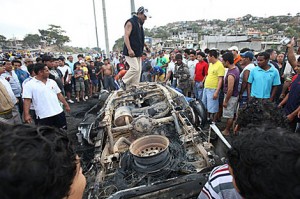 According to Diario El Universo Luis Alberto Hessmer is the author of the accident. Apparently he was driving under the effects of alcohol, he had 1.8mm of alcohol running through his veins; at the moment he is being held at Guayaquil Transit Commission (CTG).

“He fell asleep while driving a Dmax truck” said Carlos Pérez, Sergeant of the Transit Commission.

People are so concerned about this horrible accident, some of them have expressed their feelings on twitter, creating the hashtag #sitomasnomanejes (if you drink, don’t drive).

Government Rules Out the Blackouts