This Thursday the Minister of Foreign Trade, Francisco Rivadeneira, announced that “Ecuador has completed the process of negotiations with the European Union (EU) to join the Multiparty Trade Agreement,” while noting the results of an “effort of about four years.”

Rivadeneira met in Brussels with EU Trade Commissioner Karel De Gucht, to conclude, at the highest level, the agreement negotiations, which finally closed at 04:00 (Ecuador time).

The agreement “is adapted to our needs,” added the Ecuadorian official, explaining that “it maximizes opportunities, reduces costs to a minimum, respects the country’s development model and allows the protection of our sensitive sectors.”

Under the terms of the agreement, Ecuador gains zero tariff access to the EU market for all of its industrial supply, including agro-industry, which will allow “the growth of the productive matrix,” said Rivadeneira, while the EU seeks better access to the procurement of Ecuador, and requested that Ecuador ratifies its commitments regarding intellectual property as told by the rules of the World Trade Organization (WTO). 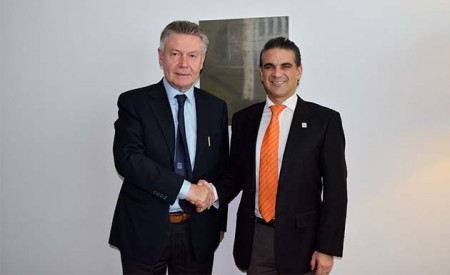