Ecuador will seek investmen and knowledge from India 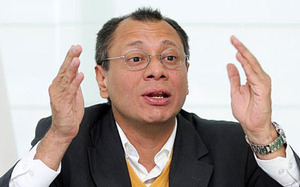 The announcement was made by the Vice President of Ecuador, Jorge Glas, during the weekly report of the Presidency, which replaces the leader of the regime, Rafael Correa, who carried out an international tour.

Glas said that on December he will travel to India in search of investments, knowledge and to strengthen the relations with that nation.

“They have a lot of technology in pharmaceutical industry, especially since they can come to Ecuador, invest and be part of this change process of the productive matrix carried out by the national government,” he added.

The vice president said that they will continue fostering relationships with countries “who may be interested in investing in Ecuador, transmit technology. India is a country that has many basic industries, which we qualify under our Plan of Good Living as industrializing industries.”

He explained that these are industries that have the capacity to generate other production processes, other small industries around which represent a “technological breakthrough” for the country.