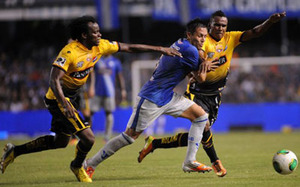 Barcelona vs Emelec, the classic match

With the tie 2-2 between the players of the valley and the Catholic team, both teams slowed in their aspirations to arrive first and set the championship in a final against Emelec.

The guard made ​​31 points, two of the millionaires team that face Barcelona this afternoon in the classic match and if they win will distance them with five more points and would approach them to its target of being champions without playing off, right given for having won the first stage.

The classic match will be played at the Capwell stadium from 16:30 before more than 20,000 fans who have sold out the tickets to watch the most important soccer game in Ecuador.

Yesterday other games were also played: Quevedo won in their court 1-0 to El Nacional, and Liga de Quito took out a 1-1 tie with Manta in their field.

Today, in addition to the classic match, Liga de Loja will play against Deportivo Cuenca, in Loja; and Deportivo Quito will face Macara.