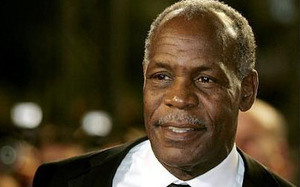 American artist Danny Glover will visit the Amazon next week to join those who condemn the U.S. company Chevron for environmental damage in the oil industry between 1962 and 1990.

The Ecuadorian Vice President, Jorge Glas, announced the arrival of various artists and celebrities. “On Monday we will receive some international figures such as the American actor Danny Glover whom we will give a warm welcome to our country and then he’ll also put his hand in the toxic pool Chevron left us in the Ecuadorian Amazon,” said Glas in the weekly report of the Presidency.

Last September, the president of Ecuador, Rafael Correa, traveled to the Amazon to show on the site what it considers “Chevron’s dirty hand,” while the U.S. oil company denies charges of pollution.

Correa with his hand collected oil waste from an old pool, he said, they left the oil for about 26 years, but still remains in a thousand rafts built by Texaco, later acquired by Chevron, to accommodate waste from their operation between 1962 and 1990.

The oil company called the action a “media show” and insisted that the Ecuadorian president allegedly showed signs of interference with the environmental process of thousands of settlers and indigenous people of the Amazon against Chevron instituted over 13 years ago.

In 2011, the Superior Court of Justice in the Amazon province of Sucumbios, condemned Chevron to pay more than 19,000 million dollars for environmental damage in the region during the time that the oil was extracted. Chevron believes that this process was the victim of a fraud scheme initiated by the lawyers of the settlers and indigenous Ecuadorians who sued Amazon, first in U.S. courts and then in Ecuador.

On 18 September, the Ecuadorian Intellectual Property Institute reported that Chevron may not dispose of the royalty of fifty brands sold in Ecuador due to an seazing.