The governorates and zonal coordination of the Foreign Ministry will become registration points for Venezuelan migrants in Ecuador. 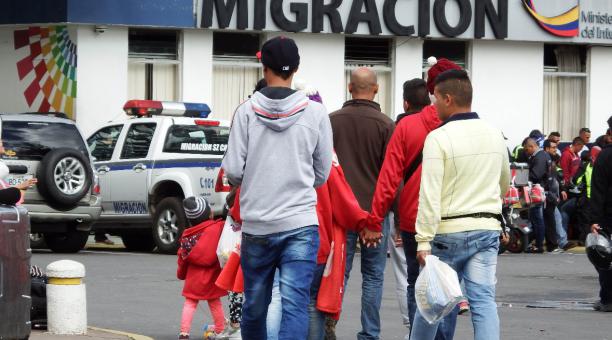 The Minister of Government, María Paula Romo, said that next week mobile points and information brigades will also be installed in migrant streets or places of concentration.

As part of this process, personal data, full names, place of birth, marital status, information about relatives or relatives, sources of income, among others, will be collected.

The program includes the taking of photographs and fingerprints and is the first step for the delivery of the humanitarian visa, to those who exceeded the time for their stay in Ecuador.

Although the presentation of an identity document will not be essential, this process can only be accessed by those who entered the country through regular immigration control points.

The Human Mobility Law stipulates a fine of a unified basic salary (USD 394) for foreigners who enter through irregular steps.

Those who violated this legal provision should pay the fine and then begin the regularization process, said Assistant Secretary of Security Diego Tipán.

The official clarified that the criminal records of Venezuelan migrants will not be required.

The Government will seek to involve the mayors in this task. It will not be necessary for those who already have a visa to register.

In principle, the start of this process was scheduled for October 26, but the authorities assured that it was decided to advance it because the necessary technological infrastructure is already available.

The plan is supported by the World Organization of Migrants (IOM) and the High Commissioner for Refugees Acnur (Acnur), as well as experts from Colombia, a country where similar work was done.

The guidelines respond to Executive Decree 826, dated July 25, under the principles of an orderly, regular and safe migration, Romo said.

At present, the number of income to Ecuador of citizens from the Caribbean country does not exceed an average of 40.

That, after starting August 26, they are required to present visas. Romo appeared to the Commission of International Relations of the Assembly to support the reform of the Organic Law of Human Mobility, which drives the Executive, in the wake of the migratory wave.

At the session, only four of its 12 members attended (Fernando Flores, Dennis Marín, Pedro Curichumbi and the alternate of the assembly René Yandún). Flores, who chairs it, had to install it in general commission.

Venezuelan citizens must provide an identity document, fingerprints and information about their family environment.

The official estimates that this campaign, which in principle should start on October 26, will benefit about 320 thousand people of that nationality.

Romo appeared on Wednesday before the International Relations Commission of the National Assembly.