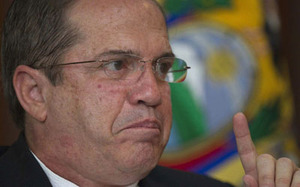 The regime of Rafael Correa wants immigrants affected by the mortgage crisis in Spain to create an association to make a class action suit against financial institutions and seek a repayment for the damages ocurred.

This was the approach followed by the Foreign Minister Ricardo Patino to the immigrant community that met with him in Madrid.

According to Patino, being part of this organization would not disengage from the Platform of People Affected by Mortgages (PAH), for the creation of this new entity “is only for legal reasons, so that the Government can sponsor that demand.”

This movement is what Patino has called the “Ecuadorian counter offensive” to those who lost their homes by the crisis, and not to drag unpayable debts Spanish, while the ongoing eviction processes are detained.