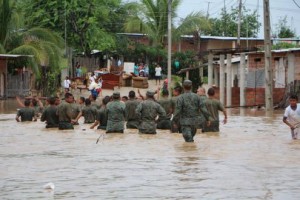 The overflow of the Zarumilla river caused the flooding by an 80% of Huaquillas, bordering city with Peru. (Source: El Universo).

Six cantons of the El Oro province were declared in local emergency due to the overflowing of rivers and streams that have caused floods. The Zarumilla river international canal overflowed on Saturday because of heavy rains, affecting the bordering populations with Peru.

The mayor of the Huaquillas countie, Ronald Farfan, reported that 53 neighborhoods have been affected by the flood. About three shelters and community centers were set up to receive the affected families. “80% of the city awoke flooded, the water level does not go down because we are facing a rising tide,” said the mayor.