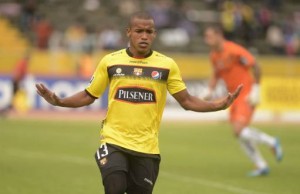 Barcelona added a victory as a visiting team against Universidad Catolica at the Olimpico Atahualpa stadium. (Source: El Universo).

This Sunday, Barcelona beated 2-1 Universidad Catolica at the Olímpico Atahualpa Stadium, in Quito, for the tenth round of the National Championship with goals by Ely Esterilla (51m) and Alex Colón (74m). A free kick of Efren Mera (70m) gave the only score to the home team.

With this result, the yellow team adds its first victory as a visitor and is situated in the fifth place with 14 points. It now awaits to play against the Deportivo Quito in the eleventh date. Instead, the Universidad Católica will play as a host against El Nacional.