Encounters for the amendments will continue from March to October 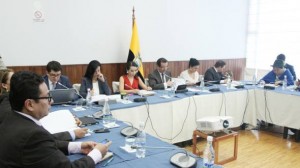 It is expected for the socialization of the first package of constitutional amendments, boosted by the government, to intensify in the months of March to October. Within this package is the indefinite reelection for popular election authorities.

The Casual Commission that submits them  in  the Assembly has not yet met to officially unveil the schedule; however, the President of the organism, Juan Carlos Cassinelli (AP), indicated that these six months will be the most intense in terms of citizen participation and socialization hearings.

The first one, would take place in Montecristi, while the writing of the report for the second debate will start in November and its approval is scheduled for the first week of December.

This year Venezuela seeks to strengthen five themes with Brazil