Entrepreneurs talked about dollarization in Guayaquil 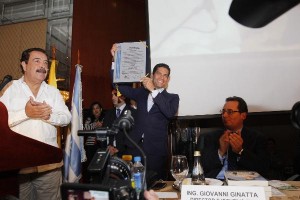 Yesterday took place the fifteenth conference of “Strengthening dollarization, recipes to make this century of the youth”, conference, organized by the Inter-American Business Federation (FIE for its Spanish acronym).

Joyce de Ginatta, President of the FIE, said that the meeting sought to discuss and defend dollarization and “to avoid them (the government) to apply a dedollarization anesthesia on us”.

In the meeting businessmen met for instruction and remembered what happened in 2000, when the monetary system change occurred in the country.

Joyce de Ginatta said: “The country has a different thing, the private sector has money in cash, but the public does not. The scheme must be changed. We do not need more loans, but more concessions in free trade agreements”.

In the meeting participated the Mayor of Guayaquil Jaime Nebot, and Carlos Falquez, from Machala, as well as the Prefect of the province of Azuay, Paul Carrasco.

A long-awaited conference by attendees was the one from the recognized journalist of CNN in Spanish, Ismael Cala, who gave his speech about the power of listening.

Product labeling information will be checked under the INEN rules

Ministry shows axis of the trade agreement with the EU