Prefects of Guayas and Los Ríos will address border disputes 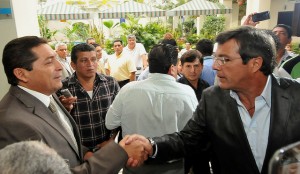 Prefects Jimmy Jairala of Guayas and Marco Troya of Los Ríos will tackle the bordering conflicts between the two provinces on September 23. There are 84.72 undefined square kilometers, according to information from the Guayas Prefecture.

Next Thursday September 25, Jairala will have an appointment with the Manabí Prefect, Mariano Zambrano, in which they will address the same topic. The most sensitive interprovincial conflict Guayas faces is with Manabi: Manga del Cura. This sector has an area of ​​438 square kilometers.