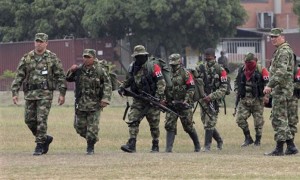 In an open letter sent to various social organizations and published on last Friday by the News Agency Nueva Colombia, akin to the guerrillas, the EPL, part of a group that demobilized in the 90s, says that “it is time for it to end conflict with all insurgent groups.”

In addition to the peace process with the FARC, which began in November 2012 in Cuba, the Colombian government began exploratory talks last January for a similar dialogue with the National Liberation Army (ELN), the country’s second largest guerrilla group.