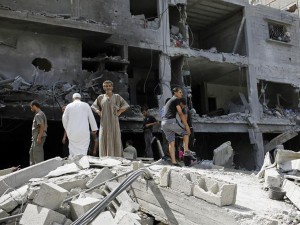 Israeli Prime Minister Benjamin Netanyahu has accepted a request from the UN to extend for another 24 hours the humanitarian truce, which was in force in Gaza today, government sources quoted by major local media.

Netanyahu, who on Saturday met in Tel Aviv with members of his cabinet over safety issues of its Council of Ministers, approved a disruption in offensive military activities in the Gaza Strip until midnight from Sunday to Monday.

“The ceasefire comes in handy, so we can deal with the tunnels calmly,” said to the online edition of the daily journal Yediot Aharonot, a source close to the Israeli government.

During the next 24 hours the army itself will continue to work with over 30 tunnels discovered so far, of which 16 have been demolished.

In the Israeli offensive called “Protective Edge” 1,147 Palestinians have died so far, mostly civilians, and 45 Israelis (42 civilians and 3 soldiers). Also, more than 6,000 Palestinians and at least 200 Israelis have been wounded, 150 of them were soldiers who participated in the ground offensive in Gaza.