BREAKING NEWS
Reactívate funds to Ecuador come from abroad
General Manager of Correos del Ecuador: ‘The cause of the closure of Correos del Ecuador is abuse and waste’
More than $ 34 million paid by the State per year for salaries and benefits of personnel abroad
Court of the Bribes case denied request for clarification of the ruling that Rafael Correa raised
Ecuador will have 3 types of hemp plantations
A virtual summit will analyze how to reactivate cocoa countries
Odebrecht talks about dialogue; carry debt in the SRI and glosses
The Galapagos Music Fest, an initiative to help Galapagos in the pandemic
Guayaquil gyms: online training and equipment rental to avoid going bankrupt
Banana contracts fell due to the effects of the covid-19

Evo Morales will be Bolivia’s presidential candidate for elections 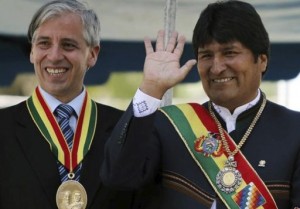 The Member of the Supreme Electoral Court of Bolivia Chuquimia Dina reported that the Movement Towards Socialism (MAS) formalized the candidacy of President Evo Morales and Vice President Álvaro García for the general elections of October 12.

Morales, 54, President since 2006, is emerging as a favorite for reelection.

At midnight Monday was the deadline for the political parties that announced their participation in the elections to submit their list of candidates for president and legislators, reported the member Marco Ayala.

The ruling Movement Towards Socialism (MAS) was one of the firsts to register its candidates, and with this begins the election campaign, reported the electoral tribunal.