Exports in the metallurgical industry increase 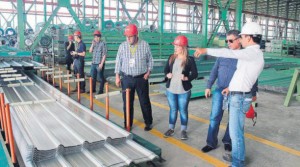 According to the Central Bank, export sales of the metallurgical sector increased by around USD 800 million between 2011 and last year. Shipments were mainly concentrated in three countries: Colombia, Peru and the United States.

The executive director of the National Federation of the Metal Industry (Fedimetal), Guillermo Pavón, said that the sector exports to over 50 countries, but points out that most sales are concentrated in Colombia and the US.

Currently, 26% of exports go to Colombia, 12% to the United States, and 11.6% to Peru. “We provide process equipment for the oil industry in 17 countries. In Canada, for example, we ship turbines for power generation,” adds Pavón.

Ecuador exported 107 tons of metal goods last year, valued at USD 363 million, while in the first four months of 2015 the country exported 49 tons, for a total of 143 million. According to the Central Bank, this meant an increase of 19.2% in volume compared to the same period of 2014.

Pro Ecuador has registered 400 companies in the metalworking sector. 90% of annual production remains in the country, and the rest is exported.