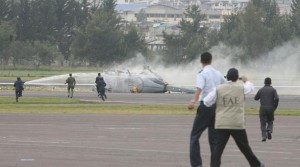 The Ecuadorian Air Force (FAE for its Spanish acronym) confirmed that yesterday afternoon a Dhruv helicopter crashed in the area of Chongón (located in the southwest of Guayaquil), during a training mission.

After the accident happened, the search and rescue system of the aircraft and its occupants was activated. The crew was rescued and its members did not present medical problems and are currently under medical observation. ” The Investigation Board of the accident is being established to determine the cause of the incident,” the FAE said in a statement.

Previously, there have been other accidents with Dhruv helicopters in the country. The seven Dhruv brand helicopters were acquired by Ecuador to India in 2008.