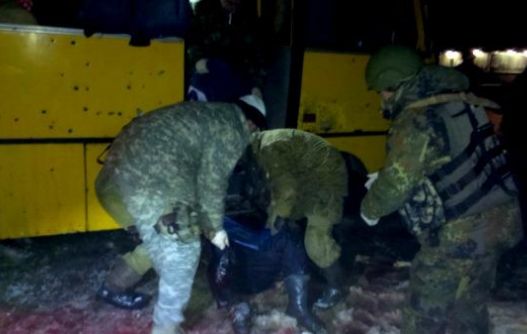 Eleven civilians were killed on Tuesday in the pro-Russian separatist eastern Ukraine, when their bus was hit by a missile at a checkpoint of the Ukrainian army, being this the bloodiest attack since the establishment of the truce on December 9.

The attack occurred near the town of Bugas, 35 km south of Donetsk, and it killed seven women and four men, told AFP a spokesman for the Ukrainian army, Viatcheslav Seleznev, and added that there are also 13 civilians wounded.

In the pictures released by the army a bus without windows can be seen, shattered by impacts of howitzer, and women’s bodies inside, on a bloodstained soil.

This checkpoint is located on the road between Donetsk, the regional capital and stronghold of the rebels, and Mariupol, a port on the banks of the Azov Sea and the last major town controlled by the Ukrainian authorities.

The prosecution of the Donetsk region, faithful to the Kiev authorities, said they had launched “over 40 Grad missiles, of which several have hit the bus.”