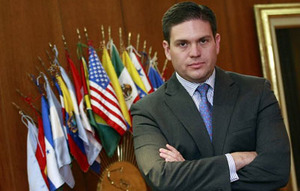 The Revolutionary Armed Forces of Colombia (FARC) denied in a statement that the guerrilla group is planning an attack against the former President Alvaro Uribe (2002-2010) and against the Attorney General, Eduardo Montealegre.

The Defense Minister of Colombia, Juan Carlos Pinzon announced on November 12 that the FARC was preparing actions against the two officials. However, the four-point document published on the website of the FARC, signed by the staff of the South Block, maintains that “it is not true that the Teofilo Forero columna is preparing an attack against the former president Uribe.”

According to Pinzon, behind the possible attack is the Teofilo Forero mobile column, considered one entity responsible for guerrilla elite and cruel actions. FARC highlighted in the virtual document highlighted the “coherent and courageous stand” of the prosecutor Montealegre “in favor of peace talks in La Habana” and argues that these claims seek to hinder the dialogue.

Catolica and Independiente played for Emelec

Assemblymen of the ruling returned to the Legislative