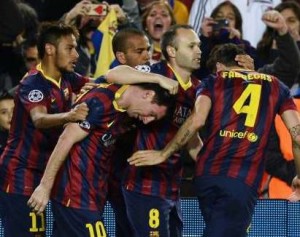 The FC Barcelona ended Manchester City’s participation in the Champions League after defeat it 2-1 with a Lionel Messi goal. In this way Catalans acceded to the tournament quarterfinals.

Barca, who achieved an aggregate score of 4-1 in the series, had a regular game but gave the final blow to pass phase.

After a mistake by Joleon Lescott, Messi opened the scoring in the 67th minute and the match became difficult for City when Pablo Zabaleta was expelled for an angry protest to the referee 78 minutes.

The Manchester City achieved the transient tie in the 89th minute thanks to Vincent Kompany, but sealed the win Dani Alves for Barca at 91 minute after a tremendous individual play from Andres Iniesta.