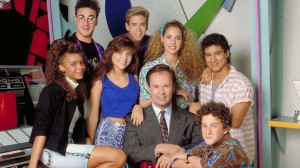 Do you remember ‘Saved by the Bell’? That TV series of the nineties, that showed the live of six guys during his classes, and then in their everyday life. Even there was a film to bring together its members.

On 1 September, it is planed to launch a new film. On this occasion, the behind the scenes will be shown. People would see how the series members lived after the recording. The Lifetime channel is in charge of the project.

The film is based on the biography of Dustin Diamond, the actor who played Screech. The book, which was released in 2009, featured some excesses his colleagues lived during their job at the series. Among them, according to Diamond’s biography, there was sex, drugs and liquor.

The project has been presented as the result of several interviews with team members and direct eyewitnesses with the intention of assembling a story as close as possible to the reality.