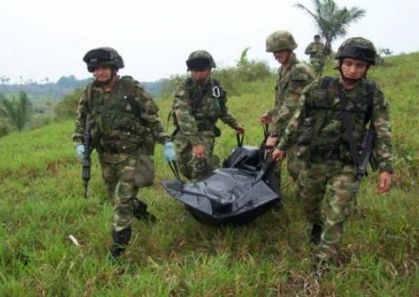 Five soldiers died in combat with the FARC in a rural area of the municipality of Santander de Quilichao, western Colombia, on the eve of a unilateral ceasefire announced by the guerrillas, the army reported on Friday.

“We have the misfortune of five soldiers who were killed, five mild wounded soldiers we have in the clinic and one missing” from the Third Brigade of the Army operating in the area, General Wilson Chawez, commander of that said in statements to the press military unit.

“In heavy fighting, at 3: 30 am (local) in the upper part of the municipality of Santander de Quilichao, we enter into combat with terrorists from Jacobo Arenas mobile column of the FARC with some supports of sixth Front of the FARC “explained Chawez.

The military carried out patrols in the area near a sector where also early morning the alleged members of the FARC detonated a bomb with 80 kilos of explosives against the Panamerican highway connection between Cali and Popayan.

For his part, Humberto de la Calle, chief negotiator for the Colombian government in the peace talks, said in public speech from Bogota “the death of several soldiers by guerrilla actions.”