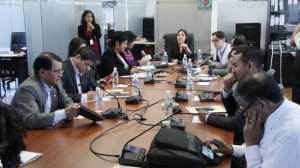 The Education, Food Sovereignty, Health, Decentralized Autonomous Governments and Workers commissions began on Wednesday the work for this year.

The Autonomous Government Commission voted for the General Law of Postal Services and the reform to the Organic Code of Territorial Organization (COOTAD). Furthermore, they initiated the analysis of the amendments to the Law of the Public Procurement System.

The Commission exposed about this last reform an amended proposal that would also implement changes on the COOTAD to unify expropriation percentages, for both autonomous governments and the central government.

Meanwhile, the Health Commission gathered representatives of the Ministry of Health, who spoke about mental health, within the observations receiving process for the new Health Code.

The Workers Commission approved the request of an extension to treat an Interpretative Law for Section 58 of the Public ServiceLaw. While the Food Sovereignty Commission adopted the report on the partial veto of the Executive branch to reforms to the Law of the National Institute of Agricultural Research (Iniap for its Spanish acronym).

Activist sentenced for insulting President Correa is coming out of prison