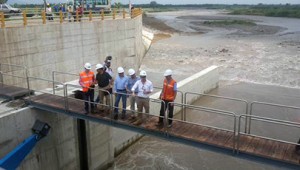 The Bulubulu Flood Control Project was inaugurated yesterday by President Rafael Correa. This system is located between the provinces of Guayas and Canar and aims to prevent floods due to overflows of the Bulubulu river.

The work had a cost of $ 57 million and was conducted by the Chinese company Gezhouba Group, and it is a 2,800 meters long and 13 meters high wall, in addition to “Las Maravillas” diverter, whose gates can get to control up to 600 cubic meters of water per second, which would then be stored for irrigation of crops during dry seasons.

A 180 meters long bridge that connects La Troncal with El Triunfo, was built to shorten the distance between these cantons. Walter Solis, Secretary of Water, indicated that the next project to be completed is the Multipurpose Chone. Until now, these works would be worth $ 1,000 million.

12 schools will not start classes due to rainfall