For 30S Commission, this fact will be latent 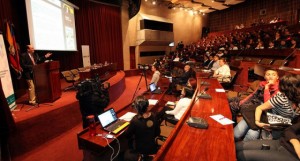 Diego Guzman and Carlos Baca, members of the Investigating Commission of the 30S, gave the conference “Journalistic coverage in times of war,” which analyzed the role of the media that day. The event was at the Summit Responsible Journalism (Cupre 2014) in Quito.

Baca said that it will always be latent the danger that another fact as the 30S happens again, especially when some political parties try to position a false report.

The commissioners analyzed 4,825 news that were published in 2010, where a 64% showed that media has a bias against public policy.