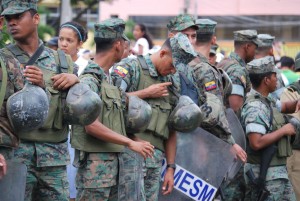 After the restructuration of the Armed Forces, announced by President Rafael Correa, changes begin to emerge in the Military Service. The military quarterings will start on June 21, and since now the preparation will last six months and not one year.

The Head of State noted that the conscripts will be trained “properly in defense tasks, not in trades”. Therefore, he said: “There is no need of a permanent year in the barracks because it is inefficient”.

He also said that when they finish the Military Service, “young people will have access to universities, military training or security forces that are being created”.

The call was disseminated by the media and on the website of the Directorate of Mobilization.