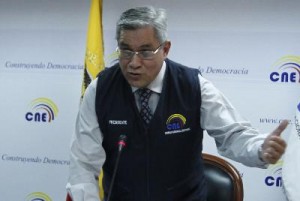 The President of the National Electoral Council (CNE), Domingo Paredes, said on the sidelines of the adoption of the oversight regulation for the process, that the election of the new Council of Citizen Participation and Social Control (Cpccs for its Spanish acronym) would be a process with more objective actions, reported El Expreso newspaper.

He also noted that international observers of the Union of South American Nations, Inter-American Union of Electoral Bodies and possibly the Organization of American States will be involved in the process.

Counselor Juan Pablo Pozo said that guarantees for a transparent process with greater participation of citizens will be given.