Indigenous have more than one reason to stay in their protests 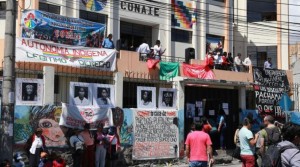 Indigenous give place to more topics on their list of alarm that has been prooduced around the announcement of the Government. The first is the termination of the bailment agreement for the occupation of the headquarters of the Confederation of Indigenous Nationalities of Ecuador (CONAIE), then the Land Law and its legislative consultation, Decree 16, the criminalization of social protest, indigenous justice, the rejection to the trade agreement with the European Union and the death of the anti-mining leader José Tendetza.

And with all those setpoints, the indigenous continued their second day of demonstrations in Quito. They marched from the headquarters of CONAIE bound to the Government Palace Carondelet. But they could not reach the Independence Square, where they found a great police deployment.

In this way, they affirm their state of emergency even though the Ministry of Economic and Social Inclusion (MIES), which ordered theeviction of the building in early December, had suspended the decision for now.