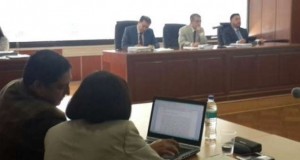 Two full days of hearings were enough for the Criminal Court of the National Court of Justice (CNJ) to sentence, last Wednesday night, former judges of the Pichincha province Oscar L. and Freddy M. to two years and a half in prison for allegedly having committed the offense of influence peddling to obtain a favorable sentence in exchange of money.

During the proceedings, the deputy attorney general, Cecilia Armas, submitted documents and testimonies which would prove that Oscar L., former judge of the Civil Court of Pichincha, was the one who contacted lawyer Oscar P. to allegedly offer him a favorable judgment regarding the expropriation proceedings of a building located in the north of the capital.