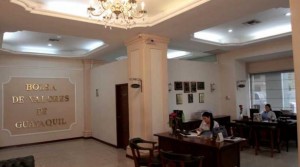 November was a good month for the issue of bonds in the Stock Exchange of Guayaquil, four companies were seeking funds directly from investors by a lower interest rate charged to the private financial system of Ecuador.

The companies that came to the stock system in that period were Automotores and Anexos (Ayasa), Industrias Omega C.A., Danielcom Equipment Supply S.A. and Incables.

Ayasa was the boldest: issue trades by $ 15 million, the rest try to find between 1 and 3 million in the Stock Exchange of Guayaquil.

Incables also placed commercial paper of about $ 6 million, according to information from the Stock Exchange.

In this trading instrument also entered in November 2015, four companies of the city, with a total of 37 million. In addition to the aforementioned set, Lavie Real Estate SA, Omarsa (shrimp), Pharmacies and Commissariat Farcomed.

Commercial paper is a type of obligation by which companies seek to raise money from investors, but will be issued with less than 360 days time.

The advantages to businesses is that they get to pay lower rates, while buyers get better performance than in banking.

Oil crisis influences the increase of the interest rate to 17.3%

‘Objections’ of IESS member upon construction of three hospitals in Guayaquil, Quito and Machala