Former President Gutierrez called for unity in the Armed Forces 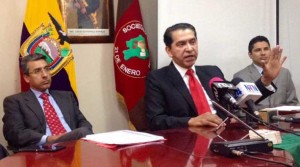 The former president and retired Colonel Lucio Gutierrez remembered on January 21, the 15th anniversary of the Sociedad Patriótica Party (PSP for its Spanish acronym), and made a call to the unity of civilian and military to fight democratically and recover, from his point of view, justice, the freedom and peace this government has violated. The way to do this is supporting the referendum initiative raised by the PSP, two months ago, before the Constitutional Court.

According to Gutierrez, what citizens want “is Armed Forces that defend the national sovereignty and not repress the people.” Whereas now, he said, the government is dismantling the Armed Forces by removing the military units changing their duties.

Regarding the proposed referendum, he warned that they can not deny his request and if they do so, the alternative will be pressing them from the streets with demonstrations.